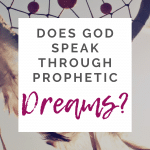 Today’s guest post is from Melissa Tumino of Think About Such Things. I met Melissa through a blogging group and we quickly found we have a lot in common with mutual friends from ministry school. When I read this post on her site I knew I just had to share it with my readers and she was so gracious to share it here as a guest post! I hope you enjoy her perspective and research on dreams and how God uses them to speak to us.

Does God Speak Through Prophetic Dreams?

Have you ever wondered does God speak to us in dreams? These are the types of questions Christians ask all the time. And there are clear answers in the Bible about dreams, visions, and other types of prophetic revelation. If you are reading this post you are either someone who dreams a lot or someone who desires to dream. And I am not talking about dreams as in ambitious desires coming to pass. But the kind of dreams that happen when we are fast asleep.

Even if you don’t remember your dreams you are still dreaming at night. The average person sleeping a full 8 hours will dream between one to two hours! Most of our dreams happen in REM (Rapid Eye Movement) sleep. It’s like our eyes are moving to watch the dream. Pretty cool how God made us!

I’m one of those people that have a lot of dreams at night. I can still vividly remember certain dreams I had even as a child.

But as Christians what are we supposed to do with that? Does God speak through prophetic dreams? Or should we just completely ignore these night riddles?

I really want to help those who are asking that question. It’s important we understand what the Bible says about it and how we can be a good steward.

Before I unwrap everything I will flat out tell you right now….YES, God speaks in dreams. Dreams are just one of the many ways God speaks to us prophetically.

But I believe it is important for us to learn about dreams because it is easy for us to toss out a dream thinking it was nothing when God is trying to tell us something.

“And He said, “Hear now My words: If there is a prophet among you, I the Lord will make Myself known to him in a vision And I will speak to him in a dream.”Numbers 12:6 (AMP)

When I was 19 I was in ministry school and I had a short simple dream. It goes like this:

I was sitting at one of the class tables with students all around me. I then grab this very red lipstick and start putting it on. Instead of putting it just on my lips I went way over my lips. I looked like a hot mess but I thought I looked good. All my other classmates were just staring at me. Then one of them said, “Why are you doing that?” (In a grossed out way)

That was the end of the dream. I woke up and thought….”Now, that was a pizza dream! So, random!”

I head to school and we started the day with worship. As I entered into worship I was reminded of the dream and I literally laughed it off…” what a stupid dream…it doesn’t mean anything!”

Then out of the blue…I heard the Lord so clear say to me, “Melissa, you took the lipstick outside of where it needs to be. You are doing the same thing when you are speaking things out to catch the eye of those around you. You do not need to impress others, but be your true self”

I was floored! There was no way I was even thinking that. I then realized I was trying to impress my fellow classmates and tried to be something I was not. I repented and asked the Lord to help me to be true to myself.

Here I was so quick to toss a dream out when God was trying to show me an area of my life that He wanted to correct.

Now, let’s take a deeper look in scripture on how God speaks to us in dreams!

1/3 of the Bible is dreams and visions!! That’s a lot of seeing! 21 dreams are fully recorded in the Bible, with 10 just being in the book of Genesis.

Dreams have also been the inspiration or the key factor in inventions! Here are just a few:

They have also inspired authors and musicians. Like the Beatles song “Yesterday”

What Does the Bible say about Prophetic Dreams?

Before we break it down into Old Testament and New Testament I want to clarify some stuff. I am showing you just what scripture says about dreams. Not what it is saying about visions or trances or other prophetic abilities.

If you would like to further your study on this topic, then check out my extensive post on this topic: The Ultimate List of Bible Verses about Dreams.

What Does the Old Testament Say About Dreams?

The Old Testament is chock-full of awesome information about prophetic dreams. He used them to guide, warn, and prepare His people.

It’s important to note that not everyone who had dreams in the Bible was following after God. Some were gentiles or the enemy of God’s people. This goes to show you that God can speak to whoever and however He likes. He even used a donkey…

Here is a chart of people in the Old Testament that had dreams:

Some key insights into dream scriptures:

God is making it clear to His people that when he talks He talks in visions and dreams, but He shows a distinction between prophets and Moses who He talks to face to face.

Showing the difference between a gift and a relationship with Him.

And He said, “Hear now My words: If there is a prophet among you, I the Lord will make Myself known to him in a vision And I will speak to him in a dream. – Numbers 12:6 (AMP)

Here is a clear picture of how God speaks to us in a dream to guide us and protect us from our own folly.

These can be warning dreams where God is warning us of that something we are doing or going to do can lead us down a bad path.

“For God speaks once, And even twice, yet no one notices it [including you, Job]. “In a dream, a vision of the night [one may hear God’s voice], When deep sleep falls on men While slumbering upon the bed, Then He opens the ears of men And seals their instruction, That He may turn man aside from his conduct, And keep him from pride; He holds back his soul from the pit [of destruction], And his life from passing over into Sheol (the nether world, the place of the dead). Job 33:14-8 (AMP)

Most people who have studied or function in prophetic are familiar with Joel 2:28 (AMP)  (also in Acts 2:17(AMP)) It’s pretty clear and self-explanatory that we are in the time of God’s Spirit being poured out. We should be seeing in the spirit.

“It shall come about after this That I shall pour out My Spirit on all mankind; And your sons and your daughters will prophesy, Your old men will dream dreams, Your young men will see visions. ” Joel 2:28 (AMP)

The author of Ecclesiastes is giving us some good advice here on dreams. He’s basically saying when your life is busy and lots of stuff is going on (aka stress) you can tend to dream a lot about those issues.

This does not mean these dreams are from God or that He can’t use them to help us grow.

These dreams would be classified as a soul dream. This is a good reminder of how we need to always take our dreams to the Lord in prayer.

“A dream comes when there are many cares, and many words mark the speech of a fool.”  Ecclesiastes 5:3 (AMP)

In Jeremiah, we see a whole different view on dreams and how prophets were corrupting it by giving false dreams. Basically, they were manipulating the situation to win favor with the king.

No matter what we dream we should never use it for selfish gain and we should NEVER LIE and say we dreamed something when we didn’t.

I’m going to call it out as it is…That’s flat out witchcraft.

“Hear this, I am against those who have prophesied false and made-up dreams,” says the Lord, “and have told them and have made My people err and go astray by their lies and by their reckless boasting; yet I did not send them or command them nor do they benefit and enhance [the life of] these people in the slightest way,” says the Lord. Jeremiah 23:32 (AMP)

What Does the New Testament Say About Dreams?

Here is a chart of people in the New Testament that had dreams:

As we can see both in the Old Testament, and New Testament God used dreams to direct His people. Both go beyond dream into visions, and other prophetic utterances.

Interpreting Dreams in the Bible

Examples would be Joseph, Daniel, The Midianites, Pilots wife and more.

No matter what interpretation comes for the Lord Genesis 40:8 (AMP). We can grow in our understanding of dreams and learn what Biblical symbols are but at the end of the day, the interpretation belongs to God.

We should always seek the Holy Spirit and His word for guidance.

As you can tell from what I wrote above dreams were a big deal in every dispensation of the Bible. But it doesn’t stop there! Hebrews 13:8 (AMP) Taking a look outside of the Bible and into church history, you will see so many cool stories of how God used dreams.

Here are a few just to get you going!

I love what Gregory wrote: “And God summoned me from boyhood in my nocturnal dreams, and I arrived at the very goals of wisdom” (S. Gregorii Theologi, Carminum, Liber II, 994-95O)

I also enjoy what James Goll says about the topic, “After the deaths of the apostles and the passing of the New Testament period, church leaders during the first few centuries of the church remained quite open to dreams and visions as a valid avenue of God’s communication with man. Many of them wrote of dreams and visions in a positive manner and some even recorded their personal dream experiences. Polycarp, bishop of Smyrna and a man who was a contemporary of the apostles and was ordained by them, was martyred for his faith in AD 155. While praying shortly before his death, Polycarp received a vision in which the pillow under his head caught fire. He understood that this image was a premonition from God of his own impending death.” Read more

Does God Speak to us in Dreams? Yes, He Does!

I hope you can see from everything I have written that God speaks in dreams! It is an active way God speaks both in the past and in our present time.

It’s important that we take our dreams and write them down. Then start to pray and ask God to show us what He is saying or if we should ignore the dream altogether.

If you would like to learn more on this topic of dreams or the prophetic make sure to check out these posts below!

Prophetic Ways of Hearing the Voice of God

How to Get Rid of Nightmares Biblically 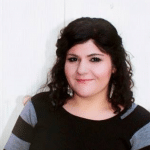 Melissa is a Spirit-Filled, LOVER of Jesus, who wants to help others grow in their faith and everyday tasks as they Think About Such Things as in Philippians 4:8.