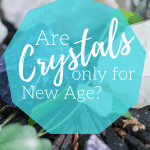 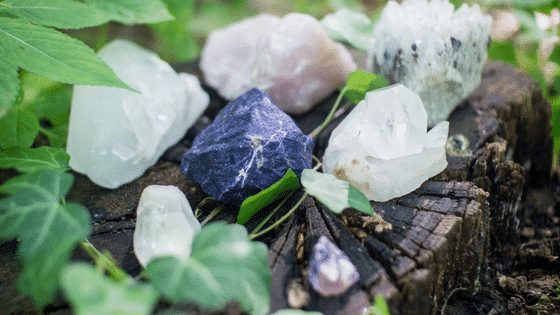 Before we dive into Christian crystal healing, let’s just start with crystals themselves. I wear a lot of quartz crystal jewelry, and while it is much more popular now than it used to be, I have often gotten those concerned questions from Christians about the crystals and what I believe about them.

I grew up in the 90s playing in the dirt and collecting rocks. My favorite place to collect rocks was my uncle’s construction site where they had hit a quartz vein.

You could literally just go out and pick up stunning crystals. So for me, they have always been a beautiful part of God’s creation that I have appreciated and enjoyed just like any of the other precious stones we use in jewelry.

In 90s evangelicalism though, crystals were definitely thought of as New Age, witchcraft, and to be avoided. Though not as prevalent as it used to be, this thinking has definitely carried into the 2000s, with many Christians being unsure of crystals, but also unsure of why they are unsure of them.

To evaluate whether crystal healing is New Age or witchcraft, we first need to define those terms. New Age is characterized by monism and the belief that there is no separation. These beliefs result in thinking that all is one and that because all is one, divine is in all.

Witchcraft is a complex topic but can be simply defined as manipulation, performing an act, spell, etc to force my desired result.

Ultimately the difference between a physical manipulation and physical act is the heart posture. As Christians we need to be careful that even in our biblical religious practices we are practicing them from a heart surrendered to God’s authority rather than a desire for control or trying to force God’s hand.

For more on New Age and witchcraft check out this talk.

Can Crystals be Redeemed?

So are crystals New Age or witchcraft? It depends on how you use them. In and of themselves, crystals are simply part of God’s creation.

When God made the world He said it was good, and that included crystals. The issue isn’t the crystals themselves but how we use them. And this is where a redemptive posture comes in.

In the New Age and witchcraft world, crystals are thought to bring healing and other spiritual benefits by placing the crystals in specific patterned grids, wearing them close to your body, or placing them around your house.

The thought is that the crystals themselves hold spiritual power that when used in a particular way will bring about specific physical and/or spiritual results. 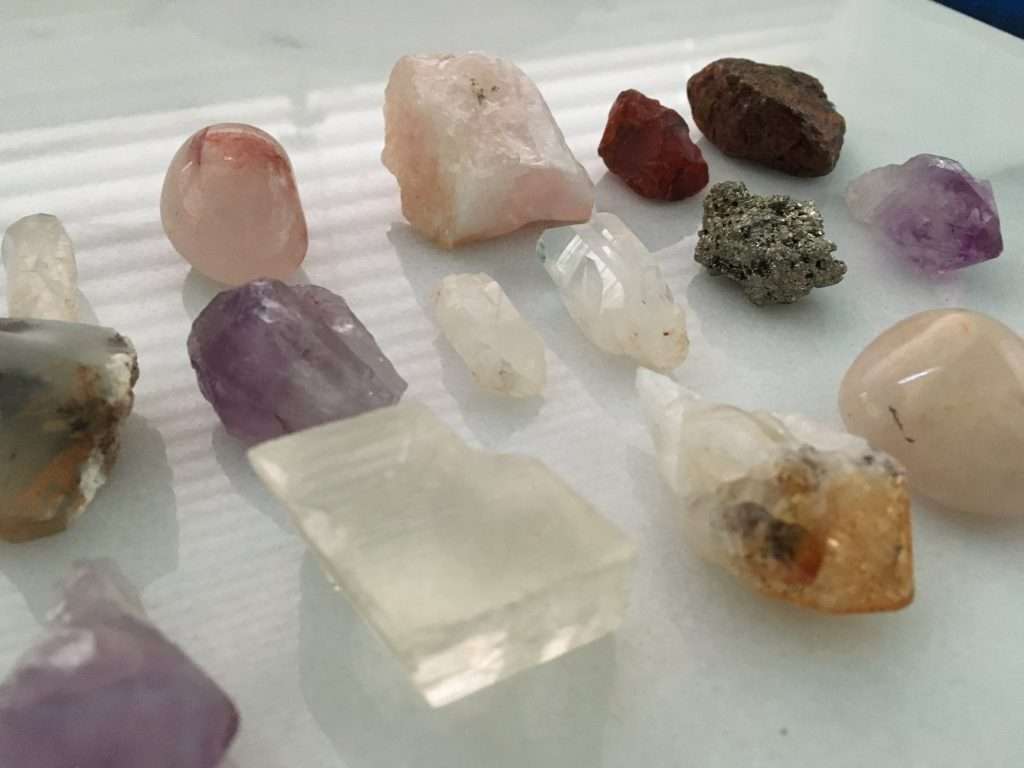 Sounds a little out there? Consider this, God told the priests to lay crystals in a specific pattern on the breastplates they wore (Exodus 25:7, Exodus 28:15-21, Exodus 35:9).

Crystals are also used in almost all of the electronics we use today because of their stable vibrations and ability to produce precise electric frequencies. The very computer or phone you are reading this article on works because of crystal oscillators.

Even though scientists haven’t been super interested in researching the exact physical effects of exposure to certain crystals, it stands to reason that if they have such strong effects on electrical frequencies, and we are constantly bombarded by various electric frequencies, radio waves, and EMFs (electromagnetic frequencies) — that perhaps the talk about crystal healing might actually be on to something.

When you strip away the New Age and witchcraft conclusions about the crystals having spiritual powers and just look at the physical properties, it makes sense that perhaps certain crystals can aid in certain physical or mental/emotional effects.

My Experiment with Rose Quartz Crystals 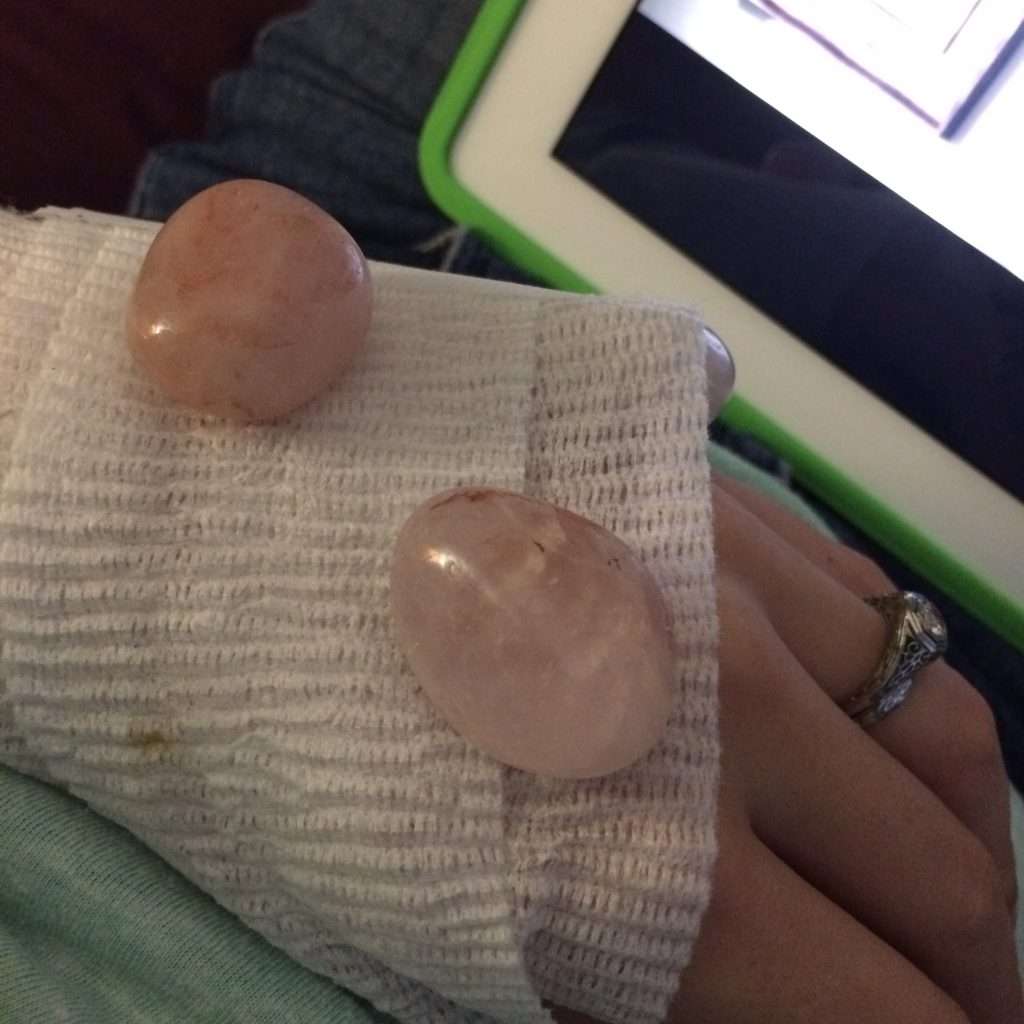 A few years ago I had a 2nd-3rd degree burn on my hand. I followed all the normal medical procedures for healing, and also used lavender and frankincense essential oils to aid the healing.

I used those specific essential oils not because they have some mystical power, but because a lot of experience and research has shown they help with burns and skin healing.

And because I’m a research junkie and crunchy explorer, I also tried putting some rose quartz over the area. Again not because rose quartz has some mystical power, but because it is said to aid in the healing of burns.

I might have looked silly holding a rose quartz on my hand, but it certainly didn’t hurt me; and my hand healed completely in under three months with almost no scarring. Who’s to say the natural vibrations of the rose quartz didn’t produce electric frequencies that helped my burn heal so well? Christian crystal healing doesn’t have to be weird. 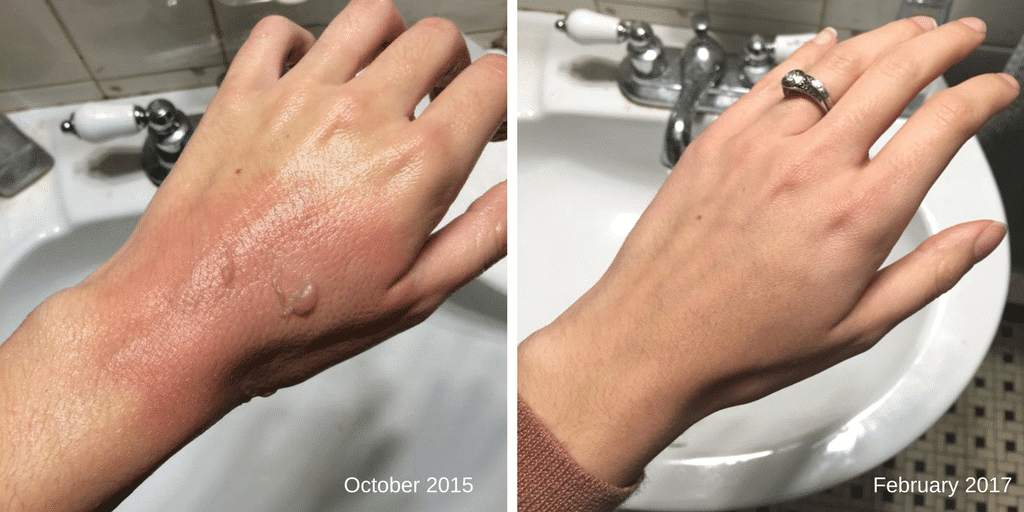 With crystals we are in a situation where the science isn’t there to back it up quite yet. But it’s easy to see that the science could be there.

Just like research has confirmed modern medicine, essential oils, meridian lines, and many other things that existed only in folklore and old wives tales before someone researched the science behind it.

If you just think crystals are pretty and want to wear them as jewelry without guilt, go for it! There is no reason wearing a raw crystal is any different than wearing a polished gemstone. They both are beautiful parts of God’s creation and it brings Him glory to enjoy His creation.

If you are worried about where to get crystal jewelry from because of the practices of others to charge crystals or speak intentions over them, Zikkaron Stones is a Christian source for crystal jewelry that is free from any New Age practices.

There is no reason though to be afraid of crystals from other sources. The Spirit that lives within us is greater than the spirit of the world. (1 John 4:4) And you can always pray that God would cleanse any crystals you have of any intention anyone else had placed on it before it got to you. 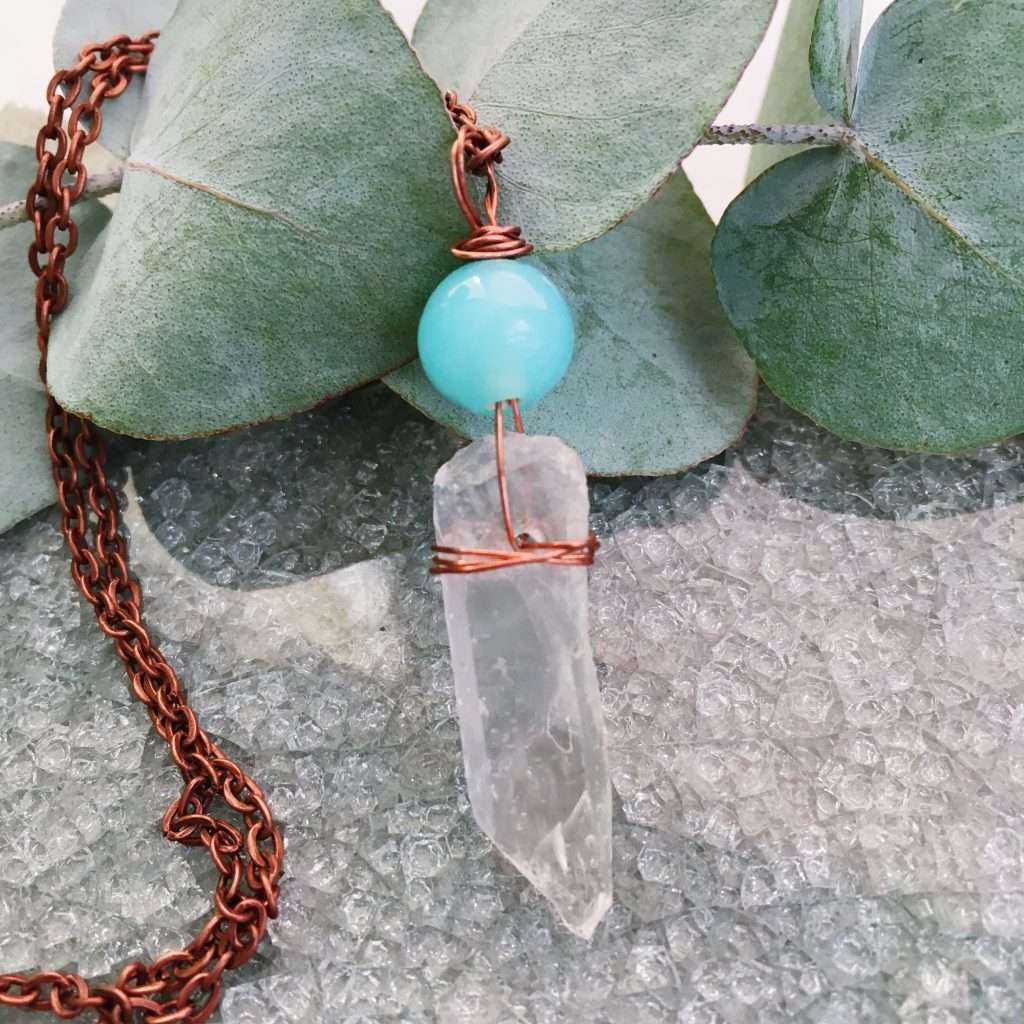 If you are interested in pioneering Christian crystal healing and researching crystals for their effects on physical healing, here is a good book to start with. It does contain some New Age notions of spiritual aspects of the crystals but if you are in a good place in your faith and not in danger of being swayed, you can easily just use them as references for the physical effects just like you might use an essential oils reference guide. 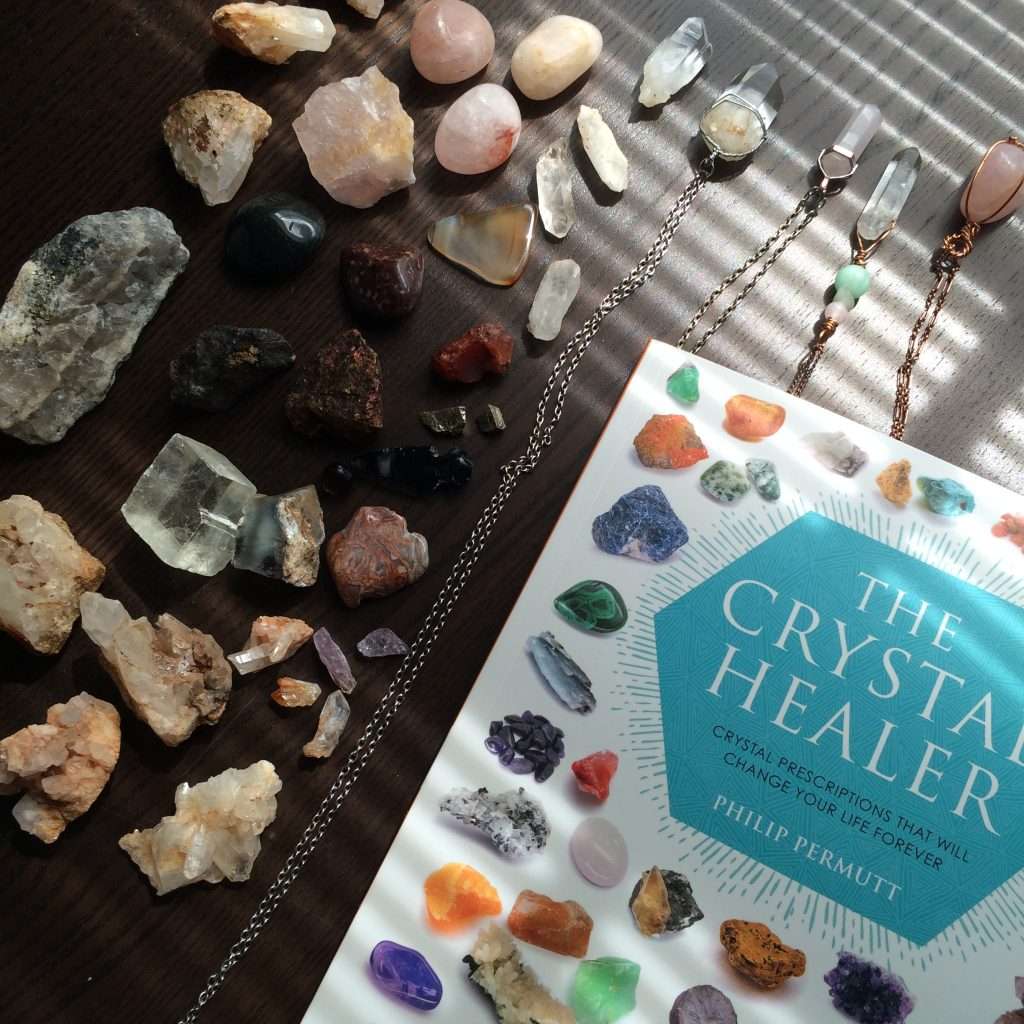 This post is the second in a monthly series. The heart of redemptive postures is that God created everything and said it was good. Redemptive postures looks at various health and wellness topics that Christians have concerns about and seeks to find what if any of those topics can be brought back to the good God originally intended for them. Click here to read the rest of the series. Subscribe below to join the Shelemah tribe and have new posts in the series emailed to you. You’ll also get exclusive access to the free resource library.

Scroll to Top
91shares
91shares
We use cookies to ensure that we give you the best experience on our website. If you continue to use this site you are consenting to the use of cookies. OkRead more