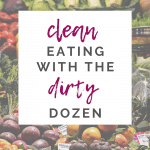 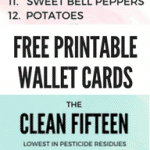 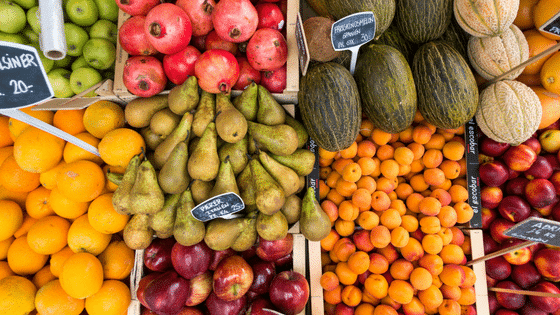 Clean eating is so important with all the pesticides, GMOs, and other additives so common in our food system (read more on that here).

While buying organic, local produce or growing your own are best for nutrient density and low pesticide levels, it is not always affordable or possible to buy organic.

What do you do when you are at a restaurant and have to pick something to eat?
What happens when your grocery options are limited and organic just isn’t offered in your local stores?
Or what about budget constraints that just make buying all organic impossible for you right now?

The Dirt on the Dirty Dozen

The dirty dozen might sound like a band of outlaws in a western movie, but they are actually a list of fruits and vegetables found to have the highest levels of pesticide residues.

Each year the Environmental Working Group (EWG) compiles a list of the the 48 most common fruits and vegetables and ranks them based on levels of pesticide residues.

The twelve with the highest presence of pesticide residues are the dirty dozen, and those with the lowest levels are the clean fifteen.

Now while these lists are helpful guidelines, you may have noticed an issue with the way they are compiled. Just because something in on the clean fifteen or dirty dozen doesn’t mean the levels of pesticide residues on them are safe or not.

The full list of the 48 common fruits and veggies doesn’t give the actual levels of pesticide residues, it just ranks the foods from most to least. This means that we don’t know how much of a difference in pesticide residue levels there is between say item 12 on the dirty dozen and item 20 in the middle of the full list.

I have reached out to the EWG asking for a list with the data they compiled for the rankings but have not heard back from them as of the posting of this article. But, because the data EWG uses is compiled from the USDA Pesticide Data Program database it is possible to some research yourself.

You might feel like you need a Phd to understand the data, but simply looking at the PPM (parts per million) for a few of the top and bottom of the list gives you an idea of what levels to look for.

Another great resource for more specific information is the Consumer Reports Risk Guide. They rank the same 48 commons fruits and vegetables for pesticide residues, but they also break down which countries of origin to look for with each type of produce.

For example, apples are number four on the dirty dozen, but conventionally grown apples from New Zealand are said to be low risk for pesticide residues because of the farming practices in New Zealand.

What’s a Girl to Eat?

With all the lists, countries to watch out for, and labels to check it can feel overwhelming trying to eat clean. The dirty dozen and clean fifteen lists are a great simple place to start for grocery shopping and eating out. 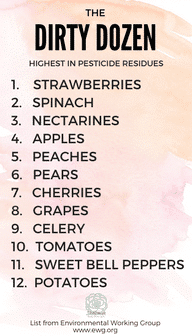 Produce on the Dirty Dozen should always be organic whenever possible to limit exposure to pesticide residues. Most of the items on this list we eat with the skins on.

When eating conventionally grown versions of produce on the Dirty Dozen clean well with a vegetable brush and cut or peel off the skin to limit pesticide residue ingestion. 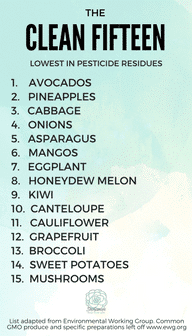 Produce on the clean fifteen has the lowest levels of pesticide residues and is generally regarded as safe to eat conventional. $1 for conventionally grown avocados instead of $2.50 for organic avocados? Yes, please! The Clean Fifteen is a great way to save money on produce and still be wise about your exposure to pesticide residues.

These fruits and veggies are also great to keep in mind when eating out at restaurants where you don’t have access to organic produce. My Clean Fifteen list is slightly different than the EWG list because I do not consider GMO produce to be clean.

I also left off produce that requires certain preservations such as fresh vs frozen since we don’t always know the preservation when eating out.

Most of the fruits on this list have thick skins that are typically not consumed. However it is still important to wash your produce thoroughly and remember to get organic if using citrus zest or peels.

Clean eating with the dirty dozen isn’t about only buying or eating organic. It’s about making wise choices when options are available.

If you can’t find or can’t afford to buy organic versions of the dirty dozen, it is still always better to eat fresh fruits and vegetables than to eat highly processed foods even if they are labeled organic. And eating healthy portions and balanced meals is always more important to focus on than how your food was grown.

Subscribe to join the Shelemah Tribe and get these free printable wallet cards to help you remember the Clean Fifteen and the Dirty Dozen.