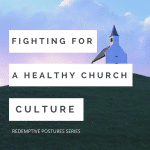 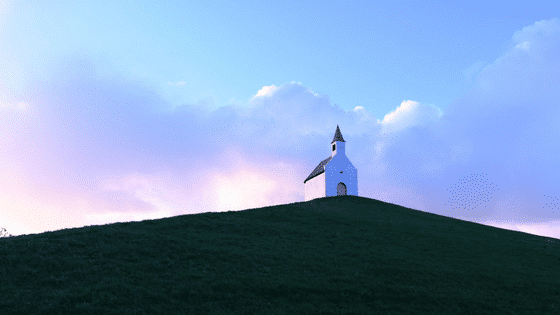 Many Christians have been burned by churches and some have chosen to abandon church altogether. But scripture is clear that Jesus loves The Church, and desires to see believers gathering together in local churches. There are no lone wolf Christians in the New Testament.

Even if you never darken the door of another church building, you need a fellowship of believers to gather with as The Church. Rather than turn our backs on the very Church Christ calls his Bride, we can take a redemptive posture towards church culture and help make his bride healthy and ready for his return.

Part of church hurt comes from going to one church after another hoping for a different experience and ultimately experiencing more of the same hurt. It takes careful examination of church culture to understand why you keep getting hurt and how to finally find a healthy church culture.

Such careful study is also needed if we are to take a redemptive posture towards the church and make cultural shifts within our local churches.

So why I am talking about church structure?

Over the course of my life, I’ve been part of churches with each of the cultures I’m about to explain. I’ve also been hurt by a church with each culture and have seen friends hurt as well.

There are no perfect churches. Each culture has its strengths and weaknesses to look out for. And each culture is capable of redemption.

Some ground rules before you keep reading:

I am not bashing any churches or any church culture. We should have a redemptive posture towards all churches, even if they are not healthy right now and are hurting people.

– Taking a redemptive posture does not mean we turn a blind eye to church hurt, but it does mean we are honoring to the churches and leaders even as we deal with stopping the abuses.

– This post is not permission to go tell your pastor everything he’s doing wrong and how he should listen to you to fix it.

– This is post is also not permission to dishonor your leaders and mutiny against them.

– Yes, I do know first hand how hard finding and cultivating a healthy church culture can be. I am in no way dismissing that struggle or how you’ve been hurt by churches in the past.

– Don’t get hung up on the titles I give each culture. If they are helpful for your understanding and remembering the concept, great. Otherwise let the titles go and take what is helpful.

– Finally, on the church culture matrix I explain below, there is no “middle” option. I’ve had some people look at the diagram and think it’s a spectrum with varying degrees along each axis or that being in the middle would be the goal.

In this case, being in the middle would be a non-culture of no message and no method. You can’t have a culture at all if those two things are not clear.

There may briefly be churches that exist in this no man’s land of non-culture but they typically fizzle out before they ever get started or find themselves developing one of the four cultures I describe.

How God Gave me this Church Culture Matrix

A few years ago I was visiting another church for a special service. I watched as everyone around me connected and loved the service, and it just wasn’t doing anything for me.

So as I sat marveling at how this service connected with so many but not myself, I asked God why, and he had me sit down and draw two lines in my journal and write, “morality, identity, evangelism, and discipleship” at the end of each line.

I may not have gotten any of the good that was planned for that service, but I sat there getting a huge download as God then unloaded hours of explanation of the simple lines he had me draw. 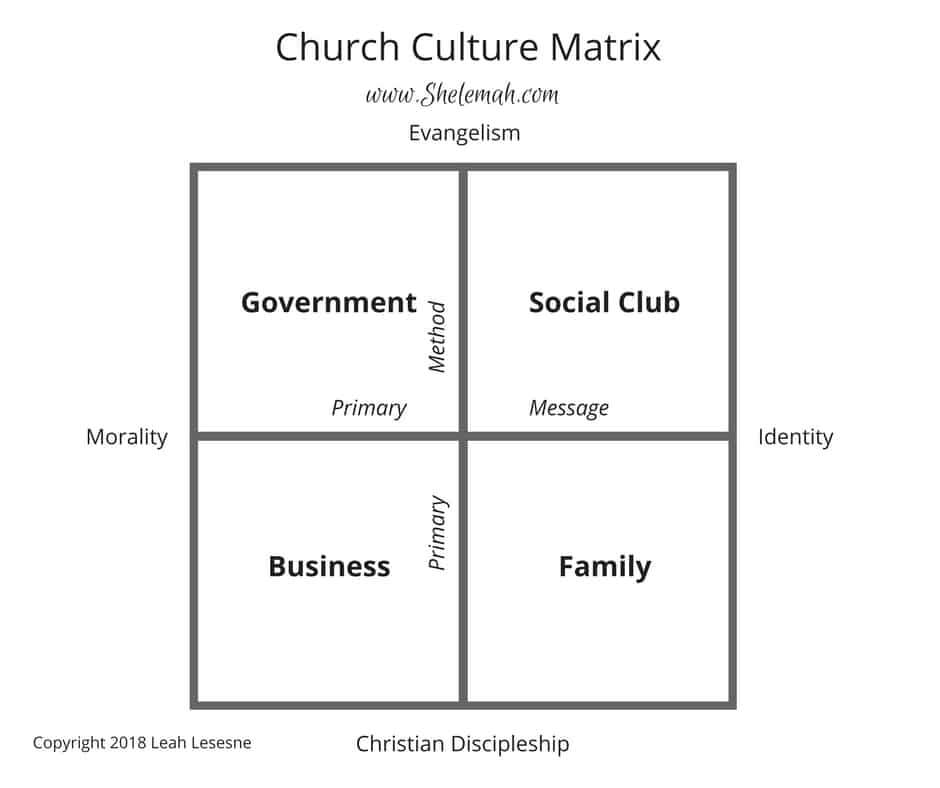 Every church has a primary message and primary method. This doesn’t mean that the don’t have other messages or methods, but that one is primary. The primary message is the driving force behind every sermon and every ministry program.

The two primary messages a church culture carries are either identity – who God is, what that means about who you are, and morality – this is what is right or wrong, here’s how to live a righteous life.

Every church also has a primary method that they use to communicate their primary message, evangelism or Christian discipleship. Again, this doesn’t mean a church does not do both, but one will always be the primary focus.

While a healthy church will embrace both messages and methods, I do believe there is one culture that is healthier than all the others. A church that is focused on the message of identity and the method of discipleship, will always result in evangelism and people that desire to live moral lives.

It just doesn’t flow the opposite direction. If your message is morality and your method is evangelism, you’re not naturally going to produce spiritually mature Christian disciples that know their identity in Christ.

There are issues as well with identity/evangelism cultures and morality/discipleship cultures which I will discuss in more detail below.

But the point I wish to make here is that while both messages and both methods are good, there is a culture that we see modeled in scripture as the healthiest church culture, and it is one I believe all churches can work towards cultivating regardless of what culture they currently have. 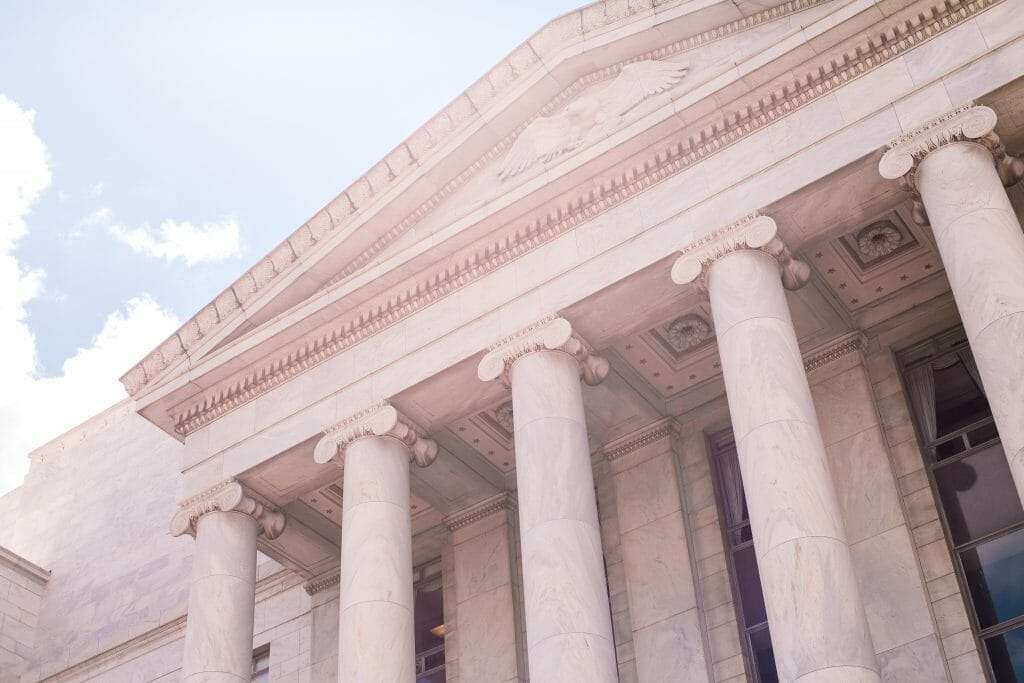 I refer to this culture as a government because it draws its strength from the size of its population. There is a consistent need for growth in numbers but not necessarily depth.

Governments typically ask little of their citizens other than following the rules and respecting the leaders.

Churches with this culture must be intentional about creating smaller environments focused on identity and discipleship. They must also be careful not to allow themselves to be built around a single pastor’s personality.

These churches need to look for the mature believers they already have in their congregation and equip them with more opportunities to minister out of their giftings (and not just ask them to serve in one of the volunteer capacities that can be filled by new believers).

As they activate those mature believers, they also need to look for ways they can bridge the gap between evangelism and discipleship.

Churches must be careful not to neglect the believers that are not new to the faith but are also not walking in maturity. It is also important to look for ways that those leading in discipleship can also be discipled themselves so that they continue to grow. 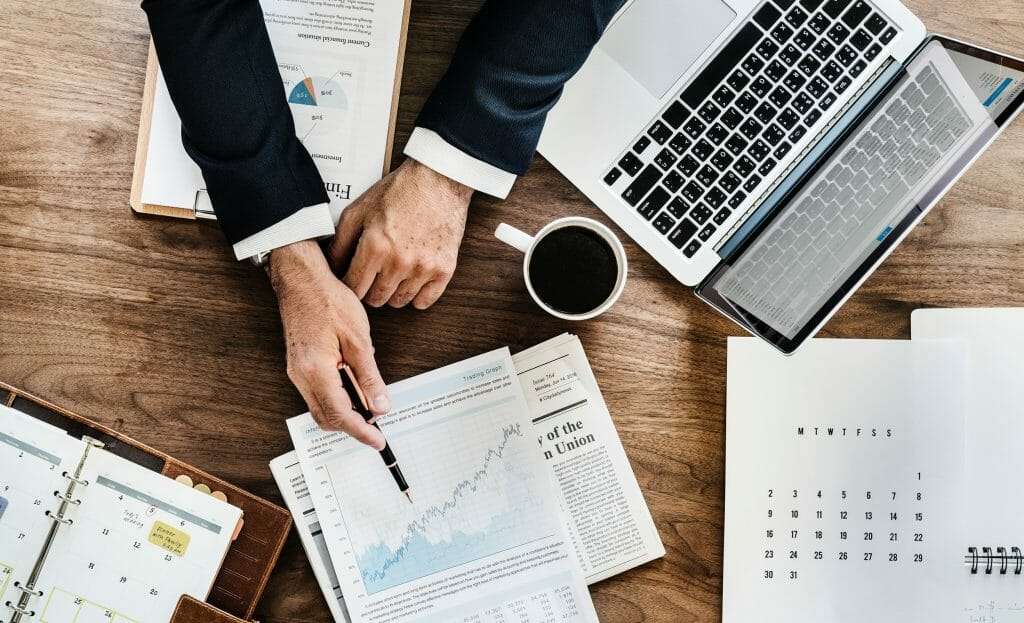 I refer to this culture as a business because it is concerned with your growth and the development of its members, but the primary way members are evaluated is by their actions and performance rather than their identity.

Churches with this culture need to learn to value who their members are more than just what their members do. Though this culture is called a business, if it learns to be more relational and identity focused like a family run business it can build upon its strengths of solid doctrine and well developed discipleship ministries. 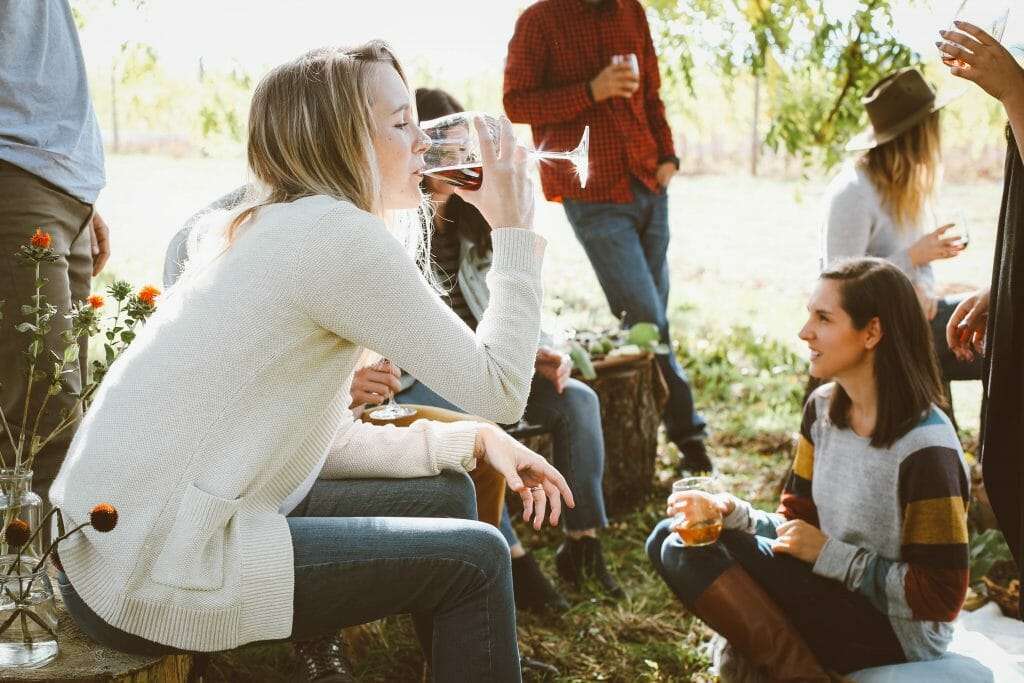 I refer to this culture as a social club because it is built around agreement upon a goal, idea, or teacher. Membership is open to anyone who agrees with that goal or idea or has chosen to follow that particular teacher.

Para-church or missions organizations can often exist healthfully in this space because it is assumed members are getting discipled elsewhere, allowing for focus on the evangelistic mission of the group.

Churches with this culture need to be sure they are grounding their teachings in sound Biblical doctrine instead of just personal experiences. They also need to develop systems of accountability and discipleship so that members actually grow instead of just going from teacher to teacher to hear what they like to hear. 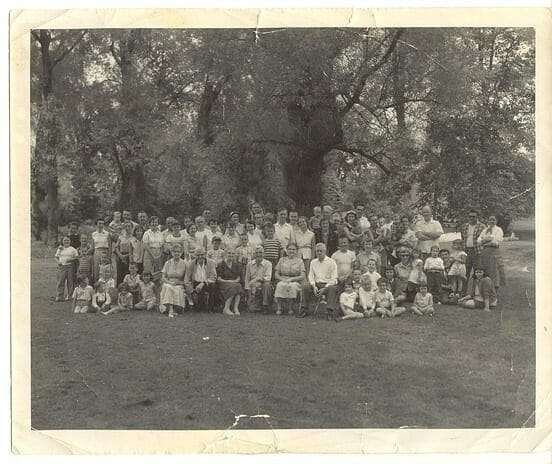 I refer to this culture as a family because it is based in identity and personal growth. In a family you receive identity by who you are related to, not what you have done or haven’t done. In a family there are mothers and fathers whose mission is to see their children grow and mature.

The biggest danger to a church with a family culture is forgetting that it’s all about identity in Christ instead of identity in earthly relationships.

Many family culture churches have failed because there became too much of a focus on one particular family or group of friends that comprised all of the leadership.

The other area these churches need to pay careful attention is how they welcome in new family members. As a family we often forget that the language we use or the values we hold are not common knowledge.

A healthy family takes special care to introduce a new member to all the things that are core to their culture and make them actually part of the family instead of just a visitor.

Churches with this culture must also be careful not to slip into a social club if they get a sudden influx of new family members and shift their method from discipleship to evangelism.

Bill Johnson of Bethel Church, Redding, talks a lot about Kingdom Culture. One of things he teaches is that culture must come from leadership down. Movements may come from the people up, but without a culture to sustain it, movements will not last. If you want to see the culture of a church redeemed it must come from the leaders.

I know that’s probably frustrating to hear if you are not in leadership and struggling with an unhealthy church culture. But you do have options. The easy option is you can leave that church and find a church that has a healthy culture.

As you may already know though, that’s really the easier said than done option. Healthy churches are hard to find. And you aren’t going to find any perfect churches.

Even though I clearly see the family culture to be the healthiest, there are still weaknesses and areas of growth for that culture.

The hard, but probably best option in many cases, is to pray for your leaders. Honor and serve them well. And when appropriate, communicate concerns you have and areas you would like to see the church grow.

There are plenty of people who request a meeting with the pastor to tell him all the things that are wrong with the church and that they are leaving.

There are few that will respectfully communicate the concerns they have, followed up with a commitment to stay and help however needed to see the church be healthy.

The good news is that Jesus cares more about the health of his Bride than we do. When we spend time with him learning to see his Bride the way he sees her, learning to have the heart for her he has, we begin to serve her and fight for her like he does.